Don Hooper sent an email recalling the IBM Sorter in November 2006 to some MNB Alumni from Data Processing and Deposit Accounting.  Ed Buckberrough responded and Don added to the “check processing” story with his recollection of what the branches did with checking reports and statements for customers.

What are some of your memories of working at Manufacturers Bank?? Please send them in an email to either Don Hooper or Barb Rehahn. 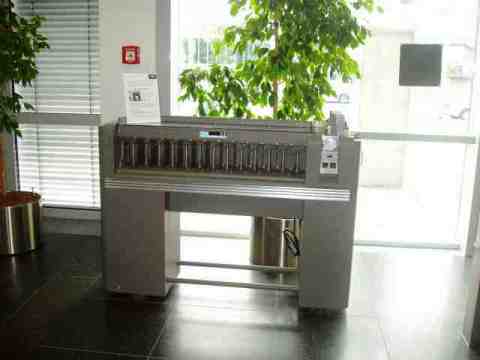 I'm quite old and my story in the IT world goes back ten years before this IBM 082 machine was built in 1950's. This photo shows a newer version of the machine. It is one of the first sorting algorithms. The machine would put a deck of punched cards (as big as you want) in a specified order. What we now call a sort was a long process, passing the full card deck one time through that machine for each column of the field that was the ordering key (twice if the order was alphanumeric).

I cut my teeth on that old piece of junk in 1960. I was on the afternoon shift in what was called Machine Accounting at that time. We used the old 082 with short feeds to sort all of the stubby checks for DDA.and when they jammed you had a nice mess to clear out, trying not to tear the checks. The 083 was faster and it was used to sort standard IBM cards, the 084 had a large file feed that could handle a full tray of cards. All of these machines could jam easily, the skill of the operator in fanning and racking the cards made the difference.

We had a manager named Bruce Far on the night shift whose knowledge of all of the IBM machines was nil, and a couple of our guys (I won't mention any names, as I know one is still active in Alumni outing) found they could made him think they were working their heads off. They would remove the reader brush and all of the cards would go in the reject slot, instead of sorting out to the various pockets. These brushes were a high maintenance item as they got damaged very easily, and it was the operator’s job to replace them as needed. Bruce thought they were doing a terrific job, and I don't think he ever found out to the contrary.

Those old machines could keep you hopping, it was more like factory work at times, but I enjoyed it very much, and the pay of $50.00 a week, plus overtime seemed like a fortune to a kid just out of IBM School.

The "stubby" checks were the old SPECIAL CHECKING card checks. Customers paid $2.50 for 20 checks....when they used them up, they went to a branch office and purchased another 20 checks. We had drawer after drawer(unlocked) of these "blank" checks in our branches. The printer, when we opened an account would send us three packages of checks for each account. When we "sold" the last book of checks, a replacement card was sent to Deluxe, and another three books of checks were mailed to the branch for storage. These had to be filed in the drawer.....arranged in account number order. These were the old gray, three or four drawer files.

When it wasn't busy in the branches (I was on utility at the time), I would take the old fan fold journal which was sent to the offices daily for our Special Checking Accounts and identify all the zero/closed accounts and pull the books of checks from the files and have them destroyed. It was amazing how many books of checks sat in the file drawers for months after an account was closed. At a couple of branches we were able to rearrange the checks and get rid of several racks of files.

Those were the good old days!

Here is a photo of the 360 system in 1965. I remember when we got one of these. In April 1964, IBM announced the System/360. Its new line of unified, compatible computers, the largest of the machines was 40 times faster than the smallest. The line was highly successful and the 360 architecture dominated the mainframe computer industry for 25 years. 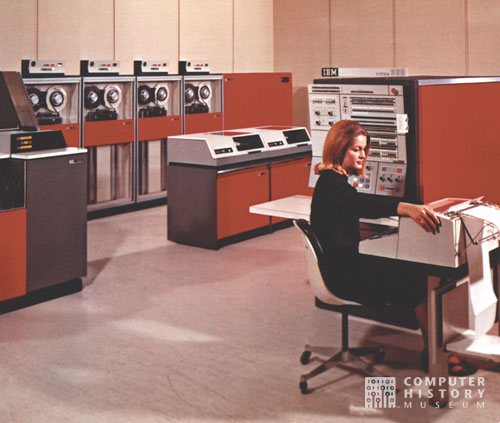 The entry-level Model 30 shown here was first shipped in June 1965.

It seems to me that someone took one of the old, obsolete computers, and used it to program and play an organ at his home. Maybe myth or maybe fact?

The first "computer" I purchased was an old Texas Instruments.....64 k memory. I had to hook it to my TV, which acted as the monitor, and stored everything on audio cassette tapes. Very primitive.

Each branch received a daily fan fold report with the Special Check Accounts (SCA's) reflecting the account number, debits, credits, and current balance. We could check that journal to verify if the customer had sufficient funds, but it wasn't a guarantee that the check would be paid. In those days there weren't many bad check or fraud types, so for the most part it worked.

We could call the "bookkeeper" on the Regular and Business Checking accounts to determine if a check was good, and she could place a hold on the account for us. No so with the SCA's.

We hand filed the Regular and Business paid checks in files in the branches, and then everybody worked to get the statements completed, stuffed, and mailed. The SCA's were sent from downtown.....we didn't have to render statements on those accounts. Statement day was really a two or three day job depending on how many checking accounts a branch had. The bigger offices had clerks (mostly co-op students) whose job it was to file the checks on a daily basis. Some could keep it done, some fell behind. Then the branch staff had to each take on part of the job. Count the checks, verify the number of debits was the same as the checks, and mail it out.

We the got the audio response system and using our touch tone phones (installed for that reason) we could verify balances, etc. I remember the first time I used ARU.....I was amazed......where would it end.